And The Band Played On

I had not met the English director Roger Spottiswoode before he called me in to his Los Angeles production office to discuss HBO's plans for a filmed version of Randy Shilts' thorough analysis of the early history of AIDS, "And the Band Played On". I was in Hollywood raising finance for my screenplay for Richard III; in the right place at the right time.

Shilts' book is a long one and I doubted that its detail could be convincingly contracted into a television film without oversimplification. I agreed with Roger that HBO's potential audience (and others worldwide) might well find a compact version of events a useful corrective to the ignorance and prejudice which in 1993 still prevailed outside those major cities where AIDS had had most impact. He told me his main problem was the unwillingness of established American actors to be associated with a project that inevitably concerned gay men's involvement with the sexually-transmitted virus.

A crucial encouragement to the filmmakers was Richard Gere's agreement to play an unnamed gay choreographer who contracted the disease: but when I met Spottiswoode no one wanted to play Bill Kraus, the openly-gay bureaucrat who represented San Francisco's gay concerns in Washington DC when AIDS was first identified. Although I looked nothing like Kraus, was the wrong nationality and was 15 years older than he when he died of AIDS related illness, I offered my services.

Eventually a celebrity-filled cast was assembled. Along with the ever-admirable Gere, Alan Alda, Madeleine Kahn, Steve Martin, Matthew Modine and Lily Tomlin lent lustre and credibility to a film which, without their support, might never have been made. There were others who cared too, notably Michael Kearns the first actor in Hollywood to be honest about his homosexuality. In one scene in Kraus's home, appeared two of the gay activists who had been party to the actual events that the film recreated. In the hospital scenes Stephen Spinella (one of the first Broadway actors to come out) lay in bed next to real AIDS patients, eager to contribute to the telling of their own story. 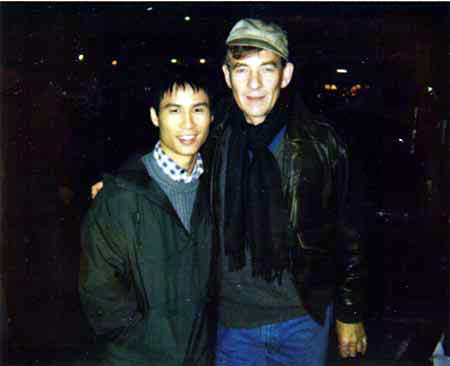 B.D. Wong and Ian McKellen on the set for a night shoot at Universal Studios Hollywood

At the conclusion of filming, Roger felt the need for an extra domestic scene between Kraus and his lover, played by B.D.Wong. A representative of the producers attended our filming, on location in a San Francisco apartment, as Kraus returned home after 3 weeks away and kissed his partner on the lips. Although he agreed that a kiss in the circumstances was plausible, Mr. HBO (a straight man in his 30's) complained that he was nervous lest B.D. and I were being "too hot" in our embrace and that it might "gross out" the viewers. I told him I doubted that it could possibly unnerve an audience which had survived the bleeding and burning corpses at the beginning of the film. This additional scene did not make it into the broadcast version.

I shall always be glad that I could attend the premiere screening at the Castro Cinema in San Francisco, where I met the late Randy Shilts as well as Bill Kraus's lover. — Ian McKellen, June 2000