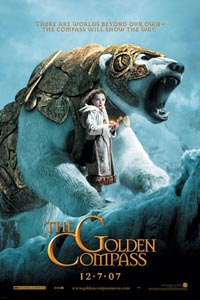 Long before global warming started melting their arctic habitat, I have worried about polar bears — one in particular. Far from home, he was trapped in London's zoo nearly 40 years ago when I was rehearsing Shakespeare's King Richard II and I paid a few visits to watch him pacing the ersatz snow of Regent's Park. He spent his days striding to and fro, 12 painful steps in one direction, then a pause and a heavily elegant turn, before re-tracing his path to another pause and another turn, all day long. Like many another captured beast he was, I suppose, insane.

His coat was tufted and his face set in a permanent scowl. I borrowed his demeanour for Richard II, who by the end of the play, is imprisoned and coming to terms with his mortality. I marked out an invisible square on the stage and paced its perimeter like the bear in the zoo.

I've remembered this when I met the armoured bear Iorek Byrnison a few months back. When I was asked to return to the New Line fold in their Golden Compass, I hadn't read Philip Pullman's novel, on which it is based. Nor to begin with, did I see Iorek in his glory, rather he was a skeletal monster who walked like a bear but looked like a computerised ghost.  My job was to give him a voice — not just me, of course, as the finished sound of Iorek was determined by the sound magicians who coloured my words with genuine snarls and breathing and roaring from actual polar bears.

I tried out the lines at home and a friend listening said "Oh I see you are using Gandalf's voice again!" Not really. Iorek has a long snout and a long passage from his diaphragm to his face, so I forced my breath up and out, as if it passed through the sound chamber of the bear's frame. It was just a few hours work, most memorable for the enthusiasm of Chris Weitz for the project he had written and directed. It felt cheating to join his film when the other actors had long finished their work, in much less comfortable locations than a cosy sound studio on Broadway New York where I was on tour with King Lear for the Royal Shakespeare Company.

Back home from touring, I was asked to add a few more grunts to the near-completed film. In London, I met Iorek again, now fitted with his fur and his armour and his adorable face. It's a great part, stretching from the drunken despair of his first appearance through to the heroism and battle of the climactic scenes. The only frustration was to be sharing the screen with Tom Courtenay and Sam Elliott and the spunky Dakota Blue as the movie's heroine and yet never meeting them in person. Particularly, I missed working again with Ian McShane, who voices Iorek's enemy, another bear. Ian and I were together in The Promise onstage for a year in London with Judi Dench and then for a short run on Broadway with Eileen Atkins in 1967. In that Russian play, we were friends who fell out over a girl and here we are, as bears, at it again.  — Ian McKellen, London, 6 December 2007

Ps. If you like stories about animals, try reading or listening to Chronicles of Ancient Darkness. The animals don't speak — these exciting dramas are remarkable for their veracity although set in the Bronze Age. But all the stories so far centre on the life of an exceptionally believable Wolf.

"Of all the people whom Lyra bonds with, however, the most exciting, as he is in the book, is that majestic, bad-tempered but fiercely loyal fighting bear Iorek Byrnison. McKellen's captivating performance might be the most memorable pure voice work since James Earl Jones took on Darth Vader. When Iorek is talking, fighting or just helping out, everything is right with this fantastic and fantastical world."  —  Kenneth Turan, Los Angeles Times

"Now the star of the film is easily Ian McKellen as the voice of Iorek Byrnison – the Polar Bear that Lyra hires to kick ass and take names for her. He imbues so much soul into this character and the animation is excellent. Particularly in the Bear showdown. And folks – there is a moment in that fight that is the singularly most badass thing that I’ve seen in a theater this year." – Harry Knowles, Ain't It Cool News