Gandalf's portrait hangs outside The Hobbit pub in Portswood, Southampton UK and has done for the last 20 years and more. I haven't been there but it's clearly not a place to ill-treat hobbits, elves, dwarves and wizards, in any way.   So what's the problem?  There hasn't been one until recently. Nor at Gandalf's Night Club in District Six CapeTown.  Nor at The Hungry Hobbit, "a sandwich bar based near the author's childhood home," according to The Guardian.

In the past, the family Tolkien Estate has forbidden any commercialisation of the works, by themselves or by others. So no Fellowship statue was permitted outside Wellington Airport 10 years ago. No exhibition of The Lord of the Rings artefacts has been licensed, except temporarily to publicise the films.

There is no Mount Doom ride at Epcot. No Tolkien theme park anywhere, to match the Harry Potter ones which J.K. Rowling thoroughly endorses. Imagine what fun WETA would have recreating the films as a theatre experience. But no, no vulgar popular theme park. What would J.R.R. think of it all? Tut tut.

That doesn't worry New Zealand overmuch. The country itself has become the Middle-earth ride.

But it worries Middle-earth Enterprises of Los Angeles. With no apparent explanation they are insisting that The Hobbit pub stop trading under that name.  As if it were possible to control the way Tolkien and his characters have entered the culture. Did anyone try to ban "Gandalf for President" buttons?  I wear mine with pride.

I am a part-landlord of a pub called The Grapes. So far no vintners' group has objected. That would be silly of course. As is this unnecessary pettiness. More Alice's Wonderland than Tolkien's Middle-earth. Harrumph.

I haven't yet talked to Stephen Fry about his disapproval of this Hollywood bullying but I'm with him all the way. All the way to The Hobbit pub once filming is over in July.

Update: Lawyers from Morder Retreat: The Hobbit pub gets a reprieve. 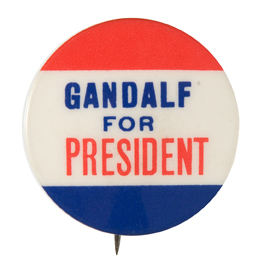 Photos: The Hobbit: The Desolation of Smaug (2013)

Photos: The Hobbit: An Unexpected Journey (2012)

The Lord of the Rings