Q: I know this is a bit early but ever since I heard about a sequel to the X-Men movie I have been waiting and waiting for an announcement of when filming will begin. Can you tell since I figure you know? Also, can you tell when the tentative release date is?

A: In order to be ready for the scheduled release on the 2nd of May, 2003, X-Men 2 should start filming in June of this year.

Q: How can Magneto use technology in these days of computers; if Magneto is a human magnet, wouldn't it make the computers go wacky? Also, if Magneto would be a compass, what direction would he be facing?

A: Interesting puzzles but as the Master of Magnetism resides in his all-plastic prison of the first film, the overriding question for the sequel must be how metal might be introduced therein to enable his escape.

Q: You seemed to play Magneto with a great deal of nearly irrepressible affection towards Charles Xavier. So much so, that fan fiction writers on the net have written prequel/back stories which feature elements of homoerotica between the two. Was this intentional on your part?

A: The X-Men comics establish the long-standing friendship and interdependence of Xavier and Magneto, which underlay their disagreement in the first X-Men movie. As for sex, Magneto's mate is Mystique. Who knows what shape or character or gender she adopts in bed? Not me nor I suspect even Rebecca Romijn!

Q: I was wondering if you could say anything at all on your impending role as Magneto in X-Men 2 (other than that you are contractually involved)? Have you seen a script?

A: I have just read a proposed draft of X-Men 2. The title page declares "NO PORTION OF THIS SCRIPT MAY BE PERFORMED, PUBLISHED, REPRODUCED, SOLD OR DISTRIBUTED BY ANY MEANS, OR QUOTED OR PUBLISHED IN ANY MEDIUM, INCLUDING ANY WEB SITE..." To ensure my compliance with this understandable constraint, each page of my script is over-printed with my name. Not wishing to spoil anyone's enjoyment of the sequel, let alone risking incarceration in a Fox-ey plastic cell, I intend to obey my orders, I'm afraid.

Q: I was wondering, will Anna Paquin be in the next X-men film. The only reason I ask, is because a lot of people say that I look like her as Rogue. Do you think I could be an extra in the movie? (I'm 16)

A: It is no secret that like most of the original cast Anna Paquin is contracted for the sequel. Casting is the province of Twentieth Century Fox, 10201 West Pico Boulevard, Los Angeles, California 90035, USA. 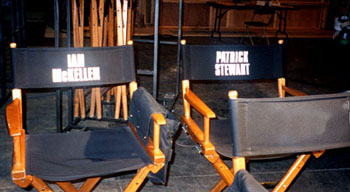 Q: I was a tad disappointed by the darkness of the Magneto costume. In the next movie, will we be seeing the full glory of Magneto's purple helmet?

A: I had hoped that Magneto's medium-grey action uniform contrasted nicely with his purplish helmet. Perhaps you need to lighten the brightness control on your video player.

Q: I've noticed that as you portray Magneto, oftentimes your hands are gently twitching, as if you are sloughing off extra energy. Is this a conscious decision as an actor to represent the character's constant interaction with magnetic fields, or is Maggy simply an agitated fellow?

A: "Maggy" indeed! It is almost two and a half years since we filmed X-Men but I recall one or two moments when some twitching might well have indicated an involuntary response to his magnetic surroundings. Of course in action he is in total control and his movements are deliberate and controlled.

Q: Which role gives you more satisfaction, the GOOD Gandalf or the BAD Magneto?

A: Although it is arguable that Magneto's motives (whatever his actions) aspire to goodness as much as Gandalf's, I prefer to try and understand the characters I play rather than to pass judgment on them and therein lies the satisfaction.

Q: In movies particularly, villains always get the best lines and the best scenes. You were a great Magneto and an astonishingly powerful and - in my opinion - very under-rated Richard III. So - have you ever been up for a role as a Bond villain?

A: To tell the truth, always my aim in these replies, I should prefer a shot at Bond himself rather than one of his protagonists. Too many of the film Bonds have missed Ian Fleming's joke, shared by other superheroes, like Superman and Spiderman, who are wimpish until they don their spandex. Similarly, Bond's off-duty demeanour is the antithesis of his heroics - an effete English gentleman, fussy about his martinis, until duty calls and he transforms into the romantic daredevil. This duality makes him a more challenging character to act than any straightforward villain.