The evening before I start filming on The Da Vinci Code, my driver Laurent is carefully taking me to the location. The white sun is still hot in a cloudless grey-blue dusty sky, dazzling us both. I'm peering left and right along the route by which Langdon and Neveu escaped. It's the end of the rush hour and traffic inches northwest out of Paris, where I am staying a couple of nights. Versailles is out here somewhere and our destination has been called "Le Petit Versailles." Dan Brown's readers know it as "Château Villette," home of my character Sir Leigh Teabing. Teabing has been handicapped by polio and I want to see what stairs I will have to negotiate tomorrow with my sticks and caliper. It is my entrance into the film. Good to be filming it first. Most of the interiors of the Cháteau will be filmed later in the controlled conditions of Shepperton Studios. But my descent of the actual staircase will help authenticate the movie.

There is a slight shift in tone, which I welcome. The novel brings Teabing in with a gothicky flourish, whereas screenwriter Akiva Goldsman is more matter-of-fact, leaving it to the director to establish mood. Clearly the architecture of the very place the book describes will enliven the film and I'm keen for my first sight of my temporary home.

Dan Brown's description of the approach to the Cháteau is a little fanciful. In reality there is, for instance, no long driveway as in the book, just a break in the eight-foot high perimeter limestone wall where a sturdy gatehouse opens straight onto the large courtyard. To the left and the right there are elegant outbuildings and in front a stately honey-coloured manor house. Behind it are a distant fountain and a large rectangular ornamental lake, but otherwise no vista.

Round the gatehouse the film crew has gathered, waiting with arclights for the sun to set so the short night's work can begin. I glimpse director Ron Howard and Goldsman chatting, checking. Audrey Tautou (Sophie Neveu) and Tom Hanks (Robert Langdon) are in the make-up van being tidged for camera. Along the lake there is the base camp of any film on location — trailers and trucks, portaloos and marquees and most importantly the catering van. Everyone has a vital job but as the unit is working through the night and traverses three separate working shifts more than twice the number of workers are on hand than are really needed. Some will be having a snack or a smoke under canvas. France is late in banning smoking from public places. 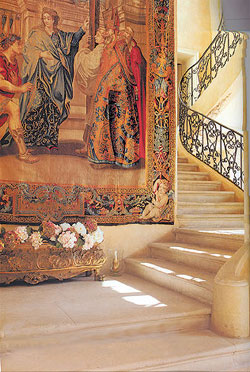 In the dining tent there are trestle tables to seat 100 plus. Most of the unit have eaten but still on another wide and long table there is a varied cold buffet, from seafood and salads through to tarte tatin and chocolate mousse. There's also hot meat that smells like roast boar. Sans doute, French caterers are superior to most.

I have a trailer. There are flowers from my agent and a glamorous leather hold-all stuffed with goodies from the producers including Earl Grey teabags for Teabing. Ron and his partner Brian Glazer have given me a very heavy book of Leonardo da Vinci's drawings and paintings, and Tom Hanks has sent a leatherbound note book and Mont Blanc pen for me to emulate his own habit of jotting things down — this diary began its life there.

The front courtyard is quiet. It's dusk and the lights within the Cháteau shine a welcome. Up the half-circular staircase through the double doors into an ample hall. And there is the staircase curving aloft. I nip up just once and can't see any problems.
— Ian McKellen, 12 July 2005