We are in France, but our train has stopped. Mon Dieu! What a train! Normally the Eurostar train operates between London and Paris: indeed that’s how I got to rehearsals for The Da Vinci Code last year. Today, for the first time, the service is being extended to the south coast of France for the exclusive use of the film’s personnel en route for the annual Film Festival in Cannes. Travelling with us is a representative of the Guinness Book of Records, so I am hoping all will turn out as planned and that we really will break the record — for the longest non-stop international train journey, that is. A confident official of Eurostar has just told our carriage that a French driving team has been taking over from the English one which brought us safely thus far from Waterloo Station (hence the stopping) and that now we will pick up speed to approximately 200 miles per hour. Which is what happens. 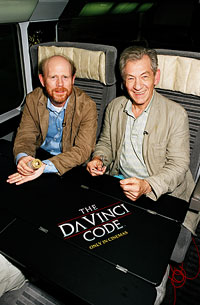 False alarm: the record is one of distance not of speed so as long as we keep going to our destination all will be well. Yet I sniff a conspiracy. Well wouldn’t you when told later that in honour of this EuroStar train being re-named “The Da Vinci Code” the author Dan Brown actually drove “his” train for 15 minutes? 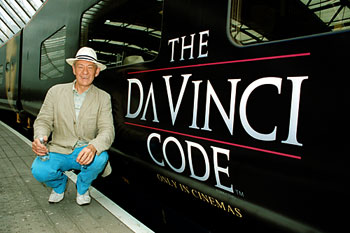 The press release says “It is an historic day. The cast will travel in style to Cannes” - well oui and non. It starts well enough with a full hot breakfast. I am travelling with my old friend Sean Mathias, who will be raising funds for his next film “Colossus” in which I am slated to play Cecil Rhodes, the 19th century adventurer who opened up southern Africa to European interests. Across the aisle are the other actors –- but not for long. I am called to another part of the train for the first of 15 interviews which, interspersed with lunch and then afternoon tea, help pass the time. While Sean reads and snoozes, I am working my passage and despite a little neck massage from an obliging “beauty expert”, the entire seven-hour journey is given up to talking in soundbites and answering the same questions over and over. 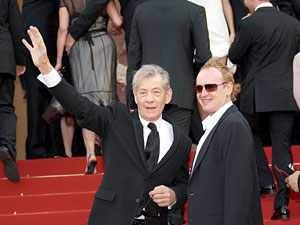 So far the three favourite queries from the world’s media representatives are:

1. “Had you read the book before you made the film?”

2. “What is your reaction to the controversy surrounding the film?”

1.”No I hadn’t read the novel, although I did subsequently. It is always wise to examine the screenplay, not the source material on which it is based. The truth is, I agreed to play in screenwriter Akiva Goldsman’s version of The Da Vinci Code and not novelist Dan Brown’s, close as they are to each other.”

2. “The remarkable thing is that the controversy has been so little, confined to the woman in a fake nun’s outfit on location at Lincoln Cathedral and the recent suggestion from a Vatican archbishop that the faithful couldn’t be trusted to see the film and make up their own minds as to its relevance to their faith. As we hurtle through southern England and down across France in a train whose 20 coaches are clearly labelled as "The Da Vinci Code," driven for goodness sake by the author himself, not a placard objects, not a fist is shaken at us, not a rotten tomato flung. When we reach Cannes, the welcome led by the town’s mayor is unanimous.”

3. “Ron’s relationship with his actors is to support, comfort and respect, perhaps because he started out as a television actor when he was four years old! He recognises when an actor needs help, when to make a suggestion and when to leave well alone. He never panics and his confidence is infectious. I never heard a voice on set raised in anger nor anxiety. For such a mild-mannered gentleman, Ron Howard is a formidable leader.” 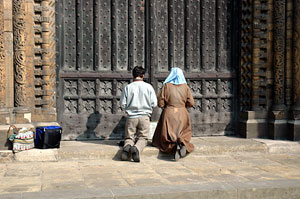 By the time we reach our hotel on the Croisette front of the beach at Cannes, the sun is out. The blue bay shelters a flotilla of yachts huge and small. There is a docile crowd of optimistic sightseers outside our hotel looking out for famous faces. I wave and check in for a bath and supper and sleep. 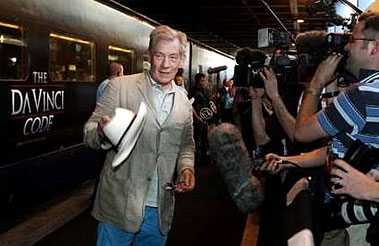 'The Da Vinci Code' actor Ian McKellen of Britain speaks to waiting media after arriving at the Cannes train station May 16, 2006 in preparation for the premiere of the film at the Cannes Film Festival . The festival will open with the film May 17.
REUTERS/Vincent Kessler